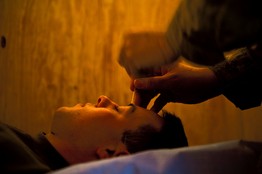 Marine Lance Cpl. Tristan Bell was injured in a jarring explosion that tore apart his armored vehicle, slammed a heavy radio into the back of his head and left him tortured by dizziness, insomnia, headaches and nightmares.

He is recovering on a padded table at Camp Leatherneck, Afghanistan, beneath strings of soft, white Christmas lights, with the dulcet notes of “Tao of Healing” playing on an iPod and a forest of acupuncture needles sprouting from his head, ear, hands and feet.

In a bit of battlefield improvisation, the Navy is experimenting with acupuncture and soothing atmospherics to treat Marines suffering from mild cases of traumatic brain injury, commonly called concussions—the most prevalent wound of the Afghan war.

After hitting on the idea in late November, Cmdr. Keith Stuessi used acupuncture, along with the music and lights, to treat more than 20 patients suffering from mild brain injuries. All but two or three saw marked improvements, including easier sleep, reduced anxiety and fewer headaches, he says. Cmdr. Earl Frantz, who replaced Cmdr. Stuessi at Camp Leatherneck last month, has taken charge of the acupuncture project and treated 28 more concussion patients.

“I think a couple years down the road, this will be standard care,” predicts Cmdr. Stuessi, a sports-medicine specialist turned acupuncture acolyte. “At some point you have to drink the Kool-Aid, and I have drunk the Kool-Aid.”

While researchers are still investigating how exactly it works, studies have found that acupuncture can help relieve pain, stress and a range of other conditions. The newest Defense Department and Department of Veterans Affairs clinical guidelines recommend acupuncture as a supplementary therapy for post-traumatic stress disorder, pain, anxiety and sleeplessness.
The VA is recruiting candidates for a study of acupuncture’s effectiveness in treating PTSD and traumatic brain injury. Based on other studies of its benefits, “there is good reason to believe that acupuncture will induce recovery across a number of trauma spectrum dysfunctions in patients with TBI and PTSD, at low cost and with little risk,” the VA wrote.

In 2008, the Navy put Cmdr. Stuessi, a 44-year-old from Wales, Wis., and a handful of other doctors through a 300-hour acupuncture course. When he came to Afghanistan in August to create a clinic to treat concussions and minor physical injuries, the commander brought his collapsible needling table. He expected to use it for the usual array of sprained ankles and sore backs.

Once at Camp Leatherneck, though, Cmdr. Stuessi stumbled across an article about using acupuncture to treat PTSD and realized many of the symptoms overlapped with those of mild traumatic brain injury: insomnia, headache, memory deficit, attention deficit, irritability and anxiety.

Lance Cpl. Bell, 22, from Billings, Mont., was patrolling a ridgeline in mid-January when the Marines in his vehicle spotted a half-buried bomb in the road ahead. They backed up onto a second booby-trap, leaving five of the seven crewmen, including Lance Cpl. Bell, unconscious. He took medicine, but the headaches and insomnia grew relentless as the days passed. “If I took a nap, I’d have nightmares and crazy dreams,” he says. “I don’t take naps.”

He was waiting to see his regular doctor when Cmdr. Stuessi invited him to watch another Marine get acupuncture. The lance corporal hates needles, but he was getting desperate. The back of his head throbbed so hard it made his eyes hurt. “I thought, ‘Something has to change here—I want to get back out there,’ ” he recalls.

The night after his first session, he slept eight hours, twice what he had managed before. Soon he was returning eagerly every three days, when the benefits began to fade. He made a recent visit after a bad night, in which he woke up disoriented, headed out for a smoke and hit his head on the bunk bed.

When Lance Cpl. Bell showed up at Cmdr. Stuessi’s plywood office in a green Marine Corps sweatshirt and camouflage pants, the doctor turned off the overhead fluorescent light and switched on a string of Christmas lights his wife had shipped him. He shuffled his iPod from “Mack the Knife” to the flute notes of his healing music.

He slipped one needle into the top of the Marine’s head, and more into his left ear and hands. As he worked, he spoke softly of “chi,” which he described as the rush of numbness or warmth when the needle hits the spot, and “shen men,” a point in the ear connected to anxiety and stress. “This is Liver Three,” he said, sliding a needle into Lance Cpl. Bell’s left foot and moving it until the Marine felt the desired effect.

Acupuncture immediately appeared to speed recovery, Cmdr. Stuessi says. His first patient, unable to sleep more than four hours a night despite two weeks of standard treatment, put in 10 hours the night after his initial needling. Most other patients have seen similar results.

Lance Cpl. Dominic Collins, who shared a vehicle with Lance Cpl. Bell, was plagued by headaches after the bombing. One night in February, he dreamed he was being mortared. He rolled out of his bunk to take cover.

He declined the clinic’s offer of acupuncture. “It’s kind of not my thing,” he says. “I have tattoos, but it’s the idea of getting stuck” that puts him off.

One Marine tried jokingly to discourage Cpl. Francisco Sanchez, who hit two mines in one day, from using acupuncture by making him sit through an action movie in which the hero stabs the villain with a needle in the back of the neck. The villain’s eyes bleed. Then he dies.

But word has spread around camp, and Marines with everything from job stress to snuff addiction now plead for acupuncture.

“All we can say is we’ve learned from the Chinese on this,” Cmdr. Stuessi says. “They’ve been doing this for a couple thousand years.”